IS YOUR ATV OVERHEATING? 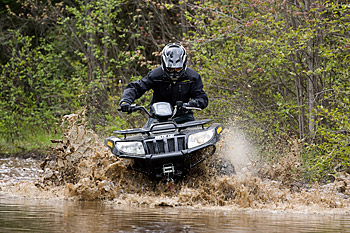 I recently spent a few hours looking over a used ATV that was overheating.

The owner kept the machine very clean so it appeared and claimed he had serviced the engine recently.

The ATV would start, run a few miles then would lose power and finally die. Without knowing what exactly this machine had been through I checked the radiator and was surprised to find it was almost empty.

After filling the rad to an appropriate level, I took the ATV out for another boot. Just like before the machine would lose power, but this time it started spewing antifreeze out onto the ground.

After removing bodywork panels to get access to the rad, the problem was right in front of me.

This ATV had been submerged in thick mud at some point and most of the mud was still caked onto the rad. So after giving it a good cleaning the machine ran like a top and the problem was solved.

Keeping your ATV cool in the heat of summer is hard enough without adding a clogged radiator to the mix.

Its always wise to ensure your ATV can breathe, but also that its key parts are in good working order. Regular inspection before and after a ride can prevent unnecessary service and keep you out on the trails.