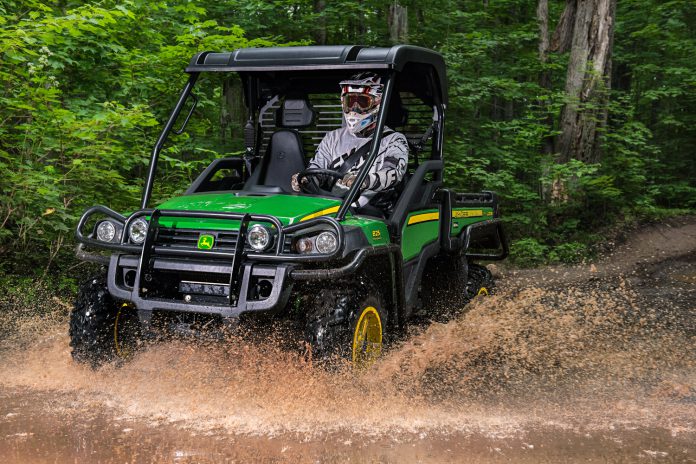 Until we had some seat time on the Gator 825i we had no idea a utility side-x-side could be such a pleasure to operate. In fact, this alone puts the 825i at the very top of our list of fave work UTVs.

The key to this smoothness is John Deere’s use of a Chinese developed and manufactured 812cc Cheri DOHC EFI triple. This 50-hp inline three is so smooth it reminds us of BMW’s famous inline six. It simply hums a happy little theme at low RPM and even when wound out it exudes velvety, creamy smoothness.

It’s hard to describe how pleasant it is to operate a vehicle with no vibrations coming through the seat, steering wheel or floorboards. In fact, the whole Gator 825i is so integrated and solid feeling it behaves more like a little truck than a side-x-side.

In typical John Deere style, the engineering team has thrown a series of curve balls across the plate and when they’re combined, they add up to an absolute win. You only have to stand back and squint at this Gator to notice its shape is different than most of its competitors.

There’s a gaping hole in the front where a windshield could fit between the roll cage and the dashboard and the odd-shaped, two-tiered doors look different than anything else. The front hoodline looks low – lower than the cargo bed further back. When you sit in the driver’s seat the view is, uh, panoramic, to say the least. You almost feel like you could fall forward over the hood if you weren’t belted in.

Instead of these differences making you feel uncomfortable, they add up to a great riding position that provides an unobstructed view of the trail right up to the headlights.

The doors could have been designed by Bentley and wouldn’t have been any more solid. They snap shut with a nice “thunk” and stay latched on the first try… always.

Even though you’re perched like someone sitting in a kitchen chair, there’s ample legroom and the controls are easy to reach for a wide variety of body shapes.

Maybe JD learned something about ergonomics from building all those tractors, dozers and combines people sit in all day.

Here’s something else smooth on this Gator. The dump box is hydraulically operated!

There’s plenty of capacity in that bed and it’s built like the USS Missouri, but who cares, it just operates so smoothly, I want it.

The Gator’s 4WD system engages without fanfare and can just be left in AWD if you don’t feel compelled to use 2WD. This is a no-brainer, user-friendly system that works (smoothly) even when you aren’t aware you’re using it.

When you need diff-lock, just flip the lever and it engages – smoothly. Same when you want to go from high to low range.

Suspension is double A-arm front and rear with a swaybar out back. Shocks are twin tube but this Gator has one of the nicest performing suspensions, front and back, of anything we’ve ridden and that includes some SxSs with real pricey gas shocks.

You can drive this vehicle over some pretty gnarly terrain at either low or high speed and you’ll be pleasantly surprised how well it performs. No harshness or jolts, it rarely bottoms out (in fact, it hasn’t yet) and remains far more compliant than you’d expect from a utility-targeted vehicle.

Brake action from four dual piston hydraulic discs is very buttery and predictable. We had Maxxis Bighorns on our press unit and those are good tires for the area we ride – plenty of bite in the greasy stuff and good grip on hard, rocky surfaces. You can factory order more aggressive Ancia MTs if you think you need them.

Our only gripe is that its a fairly heavy vehicle at 1649-lbs dry. If JD needed the weight to make this thing work the way it does, then, frankly, we don’t care. John Deere claims the 825 uses a truck-style cab frame and we don’t doubt it. It feels as solid as a rock. Its mass certainly doesn’t affect the way it works in any off-road situation and it has so many great attributes we’d hate to mess with such a good thing.

We’re not in love with the throttle governor, too, because it takes away some of this Gator’s fun factor. Besides being unnecessary, it’s set way too low.

This is flat-out a terrific vehicle and you need to take a close look at it before making up your mind on anything else.