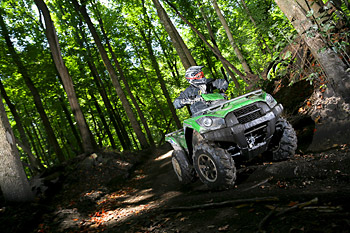 Hatfield McCoy Trails has been a valued sponsor of Dirt Trax Television for years and any loyal viewer of the show has seen many of the wonderful adventures weve had in the State of West Virginia. However, for this writer, late August marked my first opportunity, thanks to our good friends at Kawasaki USA, to sample the beautiful ATV trails weaving through the countryside.

Two things we love about our work is meeting great people and riding good equipment. For this adventure, Kawasaki parked a trailer loaded with Brute Force 750 ATVs in the quaint and historic town of Bramwell, WV, our home base and launch point.

At one point during the 1800’s, Bramwell, a former coal-mining town, hosted the most millionaires living in one location in all of America. However, the Great Depression had an enormous impact on the town and the economy quickly dried up. People moved away and the population today sits at a mere 400 or so locals. Its a clean and quiet little community (seriously, you could hear a pin drop in the middle of town) with a few local shops and a proud heritage.

The reason HMT and Kawasaki USA selected Bramwell is because it hosts the trailhead for the new Pocahontas trail system, which we think must have been named for the Pocahontas coalfields that employed 100,000 miners during the 1800s. The Pocahontas system connects the Indian Ridge and Pinnacle Creek systems and the connection of the three trails makes for the largest continuous legal system of trails east of the Mississippi River.

Bramwell is on the cusp of becoming a major off-road tourism spot and plans are already underway to invest nearly half a million dollars into a new tourist center, formerly the local school. This facility will accommodate trailer parking and act as the perfect launch point for riding. Opening day is scheduled for some time in 2013.

We’ve said it before and it’s worth repeating: Nothing beats riding good equipment. Every squeeze of the throttle aboard the Brute emits a glorious bark from its smooth 749cc V-twin. It is easily one of the best sounding mills on the market and puts out generous power while winding through the Pocahontas system. Whether climbing the rock strewn and hilly advanced-level trails, careening though winding tree covered sections or grabbing a handful of diff-lock lever to get you through chocolaty goop, the Brute has what it takes to get you there.

Last season, the Brute took on some changes to the bodywork, headlights and moved to a more rugged and durable rack system. The most notable improvement for MY12 was the addition of power steering and it made a big difference to the amount of steering effort required to maneuver through tight trails. There are times when bar whip is still noticeable and we think more input from the power steering would make a significant improvement to the amount of trail feedback felt up through the bars.

We also found the stock settings on the coilover shocks to be set a bit too stiff out of the crate. For average sized riders this can be fine-tuned with an adjustment to the shock preload, however the extremes of heavier or much lighter riders may have a bit more difficulty finding that sweet spot.

By no means is this a deal breaker because the Brute does a tremendous job adapting to all kinds of terrain and almost never bottoms out in the gnarliest stuff. We do think some minor recalibration to the stock damping settings at the factory would make the ride more compliant in washboard and low speed conditions, though.

The seat is plush and comfortable and rider ergonomics are bang-on right from the digital display down to the floorboards that deliver excellent grip when climbing or descending slopes and clear our well when the mud is at its thickest. Without question, the Brute Force drips quality from every pore and Kawasakis engineers have done a fine job on the companys flagship offering.

When you’re planning your next annual outing, make your next trip to West Virginia to sample the first class trails of Hatfield McCoy and before you do, make your way down to your local Kawasaki dealership to pick up a 2013 Brute Force 750 4x4i. The combination will provide great memories and leave you hungry for your next ride.