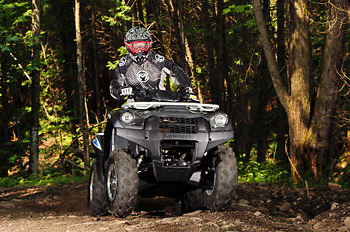 It’s always impressive to see how much one company is involved in.

At the recent Kawasaki Dealer show in San Diego celebrities from all corners of the offroad industry joined the party to show their appreciation and bring notoriety to the brand.

Did you know Kawasaki not only has a motocross team, but it also sponsors a rodeo rider? Yep, J.B. Mauney just won the latest round of Professional Bull Riding in Grand Rapids, MI.

You might wonder how that ties into offroad though. Do you think bull riders go off-roading? Well sure they do and many of the spectators ride recreationally and use ATVs and side-x-sides on their ranches and farms.

If you thought bull riding was a long reach, how about Nascar? Kawasaki’s offroad public relations front man Jon Rall was once employed by Richard Childress and still maintains a great relationship with RCR to this day. In fact he also works with former RCR driver Clint Bowyer on many occasions and Kawasaki’s TERYX4 logo recently appeared on Bowyers PEAK antifreeze car.

Kawasaki is constantly bringing new and exciting celebrities to the fold and they support many celebrity charities too. The Matt Light Foundation (former New England Patriots player) holds an annual fall shootout involving many professional athletes and Kawasaki will be right in the middle showing off product and supporting this great event.

From manufacturing off road vehicles to being a part of various charities, Kawasaki has left its mark on the industry and the world.