Live To Ride Another Day 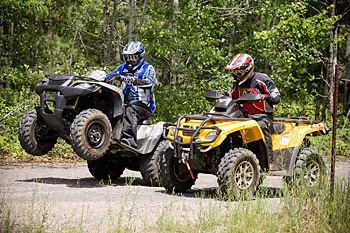 There are a couple of things everyone should think of when riding with friends.

What some riders might not know is that your ATV doesn’t care who you are or who you think you are or even what you think you can do. It was made to do a task and if pushed too far will eventually expose your weaknesses.

Just a few nights ago I watched a reality TV show that featured a guy riding his TRX 250 into oncoming traffic as the producers raced alongside noting the top speed of his trusty ATV. Luckily for him he didnt get hurt, but his luck will eventually run out.

Keep in mind that your friends want to have a good ride as well and contrary to the fact that theyll do it, they do not want to have to haul you to the hospital.

The second thing to remember is that they probably wish you’d ride responsibly rather than try to showcase just how awesome you think you are.

Know this: show-offs eventually find themselves alone because no one wants to assume the risk of being around them.