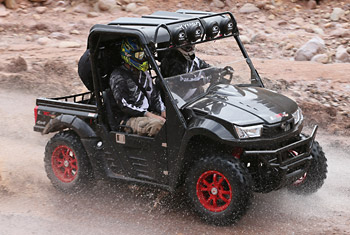 We’ve grown to know and appreciate the model lines from Kymco and with a new MXU700i introduced not long ago it was no surprise that the company’s side-x-side line would see a boost in power not long after.

So lets get to the engine as this is the biggest news for Kymco in 2014 so far. The single cylinder single over head cam four stroke motor pumps out a claimed 45hp and being fuel injected it will acclimate to any riding area with the twist of the key. The Synerjet throttle body fills the 695cc displaced machine with accurate fueling to keep the UXV rolling along.

The twisting ranch roads up the mountain pass became treacherous and narrow at times, but luckily the machine was capable of handling it. The elevation sucked away at the power of our new mill, which can be expected with any machine. Even with the elevation changes, the machine performed fairly well.

The difference in power from the UXV 500 to the UXV 700i is immediately noticeable as it moves the SXS down the trail. Most of our time was spent crawling up steep rocky trails in the Gateway Canyons area of Colorado, which is where the machine seemed to excel.

Getting into the framework of the new UXV700i you’ll find many similarities to the UXV500. Quite literally, the frame is the same throughout the UXV line with the big difference being the displacement of the engine.

The UXV700i boasts independent front and rear suspension with the base model using preload adjustable gas charged shocks, which are good for general trail riding. It’s not until you step into the sport or SP models that you’ll find the higher performance KAIFA shocks for a better ride under fast or rough conditions.

The ground clearance of the UXV700i is the exact same as the lower displaced machines using 12.2 inches down the center of the machine where the Sport model gives up an additional inch of ground clearance. This is most likely due to the KAIFA performance shocks preload or length as well as the 26-inch Kenda tires over the 25-inch spec that comes on most every other model of the UXV. Keep in mind, the machine still offers only 7.5 inches of travel both front and rear.

Its driveline features a CVT automatic transmission, which includes high and low range. With shaft driven on-demand 2WD-4WD you can select all four wheels when the terrain demands it.

As far as comfort is concerned the passenger compartment will fit the general consumer well. The seats are removable for campsite use, which seems to be a feature most manufacturers are adopting.

Sitting in the cockpit you’ll notice the digital dash and 12v power supply port located right in the center of the dash for any additional electronics you may have. The 4WD twist knob differential locker is just to the right of the machine’s steering wheel and the centrally located shift selection knob is right between the seats. There is a large dash storage compartment just in reach of your passenger as well as under the drivers seat.

The higher speeds seemed to reveal steering wander that kept us on our toes for those segments of the ride, but being pre-production machines, we should expect some more refined tuning before this model reaches the consumer.