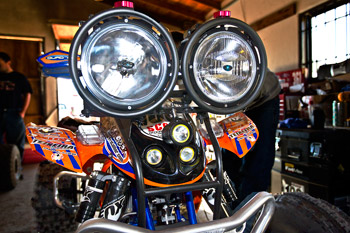 There are many riders preparing for a race right now that will either change their status in the world of ATV racing or spend a lot of money for a two-week vacation.

The mighty Baja 1000 starts in Ensenada Mexico and returns there many hours later. This race is all about finishing and not worrying about how you finish until the last hundred miles or so.

The Baja and its brutal terrain steals the hopes and dreams of many racers year after year before they even get a chance to pit for the first time along the course.

One racer from Shelbyville Tennessee will try to do the entire race alone! Michael Swift is on a mission to set up his race plans to “Ironman” The entire event.

Not only will he need physical support from as many people as he can get to follow him across the border but he will also need a few extra dollars to make it happen.

Some say a team of ATV guys can go into the unknown vast deserts of Mexico and race for under ten thousand dollars but I have personally been a part of teams who have spent twice that amount and more.

Michael Swift won’t be alone in this quest to finish the legendary race because he has his current team member from Team UXC racing Don Higbee coming along to try the same thing aboard their Can-Ams.

I wish them the best and if it works out I’ll be there helping and cheering them on at the side of a dirt road in the middle of nowhere!