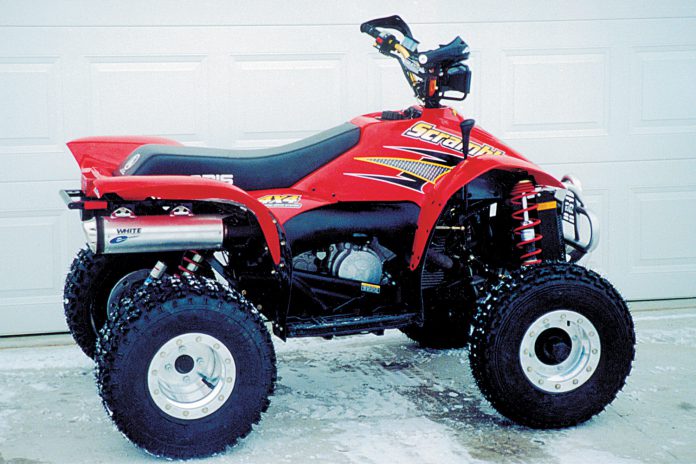 Well, this goes back a few years and is kinda puzzling.

Even though Polaris has currently re-thought the Scrambler into a fully equipped big-inch 4-stroke, the one that sticks in our minds is the older 2-stroke version that preceded it until the mid-1990s.

True, sales and demand for the last 2-stroke Scramblers had died off by the time the newer 500 4-stroke versions had come out, indicating the public was obviously ready to move on.

However, during its hayday, the old Scram was a very endearing ride – and one we just cant let go of.

We always marvelled how Polaris managed to get such good ride quality from a non-independent rear end – but owners of some of those old 2-stroke Polaris will remember how other base Polaris ATVs without IRS rode surprisingly well, too.

Maybe our crews love comes back to the lightness thing again. This 4WD sport ATV (a rarity in its day) thrived in the worst kind of slop and because of its relatively low 2-stroke weight and snappy power, could get through nearly any mud hole you challenged it with.

In those early years, sport riding wasnt about aluminum, titanium and ramping big jumps and getting as much air as possible like the 450cc pure sport ATVs that followed.

Sure, the Scrambler was by comparison dimensionally bigger and, heavier, but it had some really redeeming qualities for a certain kind of rider.

Those riders were mud riders who at the end of the day with mud-covered teeth, loved swapping stories about the impossible turf they just mastered.

That original Scrambler set the bar high for a herd of 4WD play-bikes that followed it.