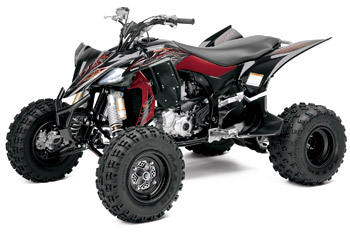 Each of the 2014 SE models gets aggressive styling with unique color schemes and graphics. The YFZs also receive a GYTR front grab bar while the big Raptors get GYTR® front grab bars and GYTR heel guards. Each 2014 SE model is being assembled at the Yamaha Motor Manufacturing Corporation of America (YMMC) in Newnan, Georgia, for worldwide distribution.

“Yamaha rules the sport ATV market which is full of some of the most passionate motorsports enthusiasts – people who love racing, riding the dunes and trails,” said Steve Nessl, Yamaha ATV/SxS group marketing manager. “The SE models have always been popular sellers and are an excellent way for Yamaha owners to stand out among their friends and other riders.”

The 2014 YFZ450R received significant changes when it was introduced in June 2013. It is the highest performance, most technologically advanced sport ATV on the market featuring all-new engine settings and more power from its high-tech, quick-revving, titanium five-valve, 449cc fuel-injected motor. The power plant sits in a lightweight, cast aluminum-steel chassis.

For 2014, the YFZ received an industry-exclusive standard assist and slipper clutch along with new styling and body configuration providing more space and comfort in the seating position. New KYB shocks with 9.8 inches of travel and Kashima coating up front complement a rear swingarm with 11 inches of travel and a new fully adjustable 46mm KYB piggyback shock absorber out back for excellent handling. The new YFZs also have new Maxxis tires at 20 inches in the rear and 21 inches in the front.

The YFZ450R models feature popular quick-release fasteners allowing for no-tools installation and removal of the front and rear fenders.

The new 2014 Black and Crimson Red YFZ450R SE will be available this spring while the Crimson Red and Black color combination is currently available. Both have an MSRP of $8,949.

The Yamaha Raptor 700R is also now Assembled in the U.S.A. at the YMMC facility and has long been known as king of the dunes combining hard-hitting power with balance and handling. Leading the industry as the highest performance big bore sport ATV, the Raptor 700R SE is powered by its 686cc, four stroke, liquid-cooled engine with quick-revving capabilities unique in a big bore but necessary for top performance on trails or in the dunes.

Leading the Sport ATV category, this big bore has a five-speed transmission – plus reverse – to give the rider control over power management. Thanks to the 9.1 inches of front travel and 10.1 inches out back, the trail bumps smooth out while the rider keeps things under control.

The all-new 2014 Midnight Blue and Metallic Grey/White Raptor 700R SE are currently available with an MSRP of $8,799.

Yamaha Motor Corporation, U.S.A., (YMUS) a leader in the motorsports market, makes the toughest, most capable and versatile ATV and Side-by-Side vehicles. The companys ever-expanding product offerings also include motorcycles, outboard motors, personal watercraft, snowmobiles, boats, outdoor power equipment, accessories, apparel and much more. YMUS products are sold through a nationwide network of dealers in the United States. Headquartered in Cypress, Calif., since its incorporation in 1976, Yamaha also has facilities in Wisconsin and Georgia, as well as factory operations in Tennessee and Georgia.