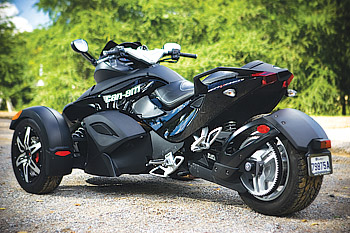 BRP claims the Spyder isn’t targeted at motorcyclists. Its appeal is different from a 2-wheeler and thus, the company is exposing it to all manner of powersport disciplines including ATV and snowmobile owners.

As you know, were gearheads and when the opportunity to wring out the new Spyder came our way, we were there in a heartbeat to get a ride on the RS version of the Spyder. It came with custom features like a Can-Am-Hindle exhaust, nifty optional hand sewn seat and a host of glittery blue anodized bits claimed to make it “personalized”.

The Spyder is not a motorcycle. It’s a different animal and, if you’ve never ridden a motorcycle, we think it might actually be a better idea. Why? Very simply, it doesn’t fall over when you walk away from it.

The stability and safety afforded Spyder riders goes far beyond what is offered to motorcycle riders. Riding on wet or loose surfaces does not phase the Spyder one scintilla. Its incredibly sophisticated anti-lock brake, traction and stability control systems prevent even a neophyte rider from losing control. Trust us, we made every attempt to get this thing sideways and it will not lose control.

The electronics used on the Spyder will intervene by activating alternate wheel braking and throttle adjustments to forbid it from breaking loose whether youre panic braking or avoiding a collision. It was a revelation to pull panic stops from 70 per without any fuss whatsoever. Just jump on the right foot mounted brake lever and let the computer do the rest.

So powerful are braking forces from the Spyder’s three vented discs we actually had to hold ourselves down on the seat. Few, if any, vehicles we’ve been exposed to are able to stop this hard.

The Spyder’s ergonomic experience is decidedly on the motorcycle side of the ledger yet definitely non-motorcycle from others. Shifting gears while blipping the loud handle on the Spyder’s 106hp 996cc Rotax V-twin qualifies as extremely motorcycle-ish. However, not having to put your foot down at intersections is very much unlike a motorcycle.

Leaning your body in the twisties feels similar to a motorcycle but more like a 4-wheeler or a snowmobile. The Spyder doesn’t lean over in turns and your body English is focused more on the upper body and cranking the bars – not a 2-wheeler trait.

Heres something were convinced is key in the marketing and acceptability of the Spyder: Stability and braking in emergencies. The staff of All-Terrain Vehicle Magazine have been around all manner of motorcycles for decades and are convinced many of the current crop of “cruiser bike” pilots are not fully capable of pinpoint braking in an emergency, particularly when it’s wet.

Safely stopping a large motorcycle requires practice and considerable skill. Modulation of the front and rear brakes requires a sensitive and precarious balance. In a panic situation it can be the difference between life and death.

2-wheeled motorcycles are tricky to throw around in an emergency. Too often riders, in a heartbeat, learn the hard way their sparkly, trusted 2-wheeled cruiser can come back and bite them.

Even a squeaky-new pilot can safely stop and maneuver the 3-pointed Spyder with proficiency exceeding many self-professing “experienced” motorcycle riders.

The Spyder is a safe, open air vehicle that provides thrills equal to that of a motorcyle with performance thatll make your desire for a Corvette fade away. We think this is the heart of the issue: For many buyers, stability and safety are paramount.

BRP calls the Spyder a Roadster. We like this name. It more clearly reflects the vehicle’s personality. It’s not a motorcycle and it’s not a sports car. It’s something completely new and completely different.