STUPID GAS PRICES AND WHAT ARE WE GETTING? 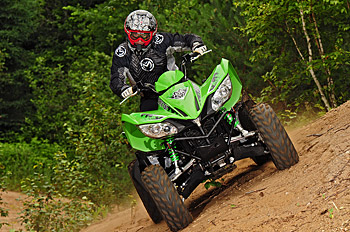 Being mechanically inclined I work on many different small engines, but ATVs are my primary target.

I hear the same comments every year about fueling issues. Its typically asked like this, “My ATV will crank and idle, but then goes dead when I press the throttle.”

I usually tell the person to check the carburetor float bowl for varnish on the primary or enrichening jets. This is usually the culprit and when its cleaned they’re back to the trail for hours of fun.

When I started looking into the causes of varnishing I began to wonder just what’s added to my now $3.75 a gallon “cheap” gas and why the price is going up when the actual fuel content is being thinned by many foreign fluids.

We’re paying more for less and it seems to be causing more than just an empty pocket. The ethanol in the fuel contributes to the varnishing but we are supposed to believe that it does not. Some say that the gasoline you buy can be as much as 4% water as well!

I know that if a carbureted ATV sits for more than three to four weeks it will likely require a fuel system overhaul. My question is, how many additives are compromising the fuel we put into our tanks?

Rick Sosebee
Previous articleWHAT’S WITH 4 RIDERS IN A SXS?
Next articleWHO NEEDS A V-TWIN?