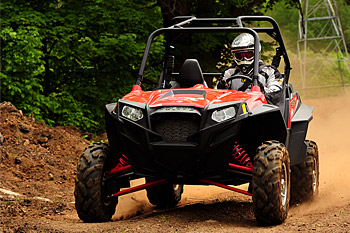 Just a few weeks back I attended the biggest event I think I have ever had the pleasure of traveling too.

People were having loads of fun and the racing was in the tallest gear and begging for more throttle.

Amidst the endless partying, some of the attendees popped the top off of some liquid courage and in the cover of darkness decided to take several ATVs and UTVs that didn’t belong to them.

I heard one instance where the promoter had loaned out his rig, which ended up breaking down in the middle of 4,000 acres of trails.

The borrower left the machine in the trail to go for help and when he returned the next morning, had no idea where the ride had gone to thanks to the handy-work of some less than noble punks.

This is where a very new device using ingenious technology comes in. The promoter had installed a new product called RidersEye GPS on his side-x-side. The small super and stealth transmitter was pinging out a signal on the UTV and within just a few minutes he’d not only gotten a signal to the exact GPS coordinates of his UTV, but could see an aerial view of the location his machine was.

The RidersEye GPS uses satellite technology alongside a web-based control panel to accurately locate your machine. It also features a remote starter disable/enable function so you can render your ride dead weight to its temporary possessor.

There’s a good chance this guy never would have found his stolen property without the RidersEye GPS. Seems like an amazing piece of technology.

You can dig around here riderseyegps.com for more information.