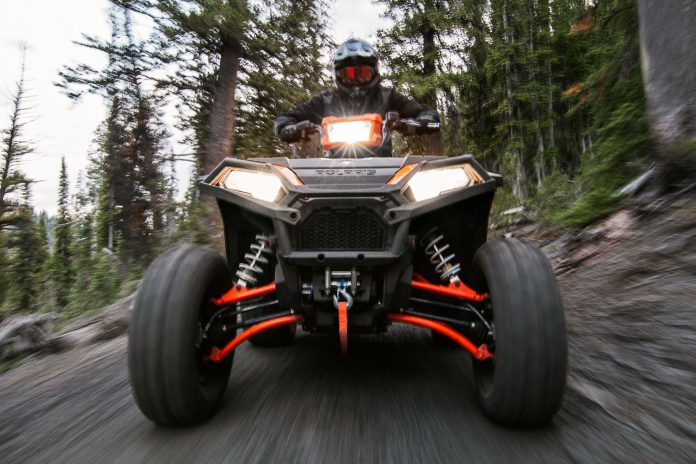 Polaris has a storied past in the Offroad/ATV/SXS marketplace. We’re going to highlight some recent and some not so recent innovations developed and pioneered by Polaris. It’s interesting to note when Polaris introduced its very first ATV models the company was literally unknown in the offroad industry.

The remarkable part of the story is just how fast the Polaris brand grew in popularity and how quickly many (if not most) of the company’s innovations were embraced by consumers and copied by their competitors.

It was 1986 when Polaris landed its first Trail Boss ATV equipped with a tiny, low output 250cc 2-stroke engine pirated from an entry level Polaris snowmobile. While the engine was less than inspiring, the way it put power to the dirt would rock the off-road world for the next twenty years.

Polaris took a proven, reliable Continuously Variable snowmobile transmission and melded it into the Trail Boss ATV’s architecture. In its first iterations CVT wider packaging was a little intrusive to the driver but subsequent versions improved ergonomically.

When Polaris introduced the CVT (snowmobile) transmission to the ATV industry it singlehandedly changed the modern ATV. All of a sudden the driver need do nothing more than squeeze the throttle to enjoy the sport of ATVing.

There is no ATV in the last 40 years that has debuted more game changing innovations than the first 250 Polaris Trail Boss. One such innovation that has spread throughout the industry since 1986, is single lever braking.

While jillions of ATVers have no idea about where the single, left handlebar mounted brake idea originated, those of us who know snowmobiles are completely familiar with the concept and operation. A right side throttle and a single, left-side brake lever controlling all four wheels was another confounding innovation from Polaris.

Many scratched their heads after being exposed to this way of braking. Why? Because it worked so well and was easy to understand for new riders. As the year’s rolled on, many more OEMs would move to the single hydraulic brake lever setup every snowmobile used since that vehicle’s inception.

This was such a no-brainer it has got to be embarrassing for the big-gun ATV OEMs of the 1980s to admit they missed it. Polaris introduced full running boards on – you guessed it – the very first ATV the company marketed – the 2006 250 Trail Boss!

Up until the arrival of running boards it was common to run over your own feet – pulling your boots off in the process, if your feet slipped off the footpegs. The introduction of full running boards protected the rider’s feet and provided extra maneuverability allowing the rider to easily move around and counter steep climbs or off-camber side-hills. Full running boards are now commonplace in the ATV biz.

Okay – we can already hear crowing that Suzuki’s original 300 King Quad had IRS before Polaris included it on the original 1996 Sportsman 500. True.

However, let’s pontificate for a moment. Suzuki, the originator of the very first 4- wheeled ATV, was a very small player in the 1990s. Furthermore, the King Quad was a small, somewhat oddly engineered unit with the engine, gear-on-gear tranny and a relatively short travel IRS system packaged as an all-in-one transaxle, power pack.

The fact still remains Polaris introduced IRS on its flagship Sportsman model and debuted at the same time its first 4-stroke ATV powerplant. The Sportsman 500 IRS was a real, full size ATV with super long travel IRS that changed the way ATVs rode and improved the way ATVs could navigate deep mud.

This too, is significant in the popularizing of IRS. Polaris wasted no time taking its Sportsman IRS chassis to a wide variety of targeted models with varying sized engines. Strangely, Suzuki never responded to the Sportsman IRS until the mid 00s.

Those shopping for an ATV often overlook this innovation.

The idea of having all four wheels automatically lay down traction in really slippery conditions rather than just three wheels, was pioneered by Polaris.

While the system’s auto locking feature was a Polaris exclusive for many years, there are now systems from other OEMs that do the same thing.

Did we miss any? Leave your remarks in the comments section below and stay tuned for the next instalment!