WHAT WE KNOW ABOUT THE WILDCAT 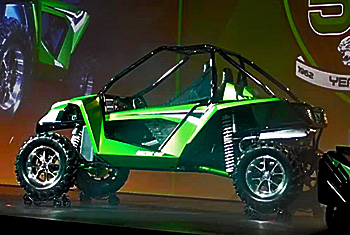 Hey, we don’t know much at this time but here are a few rock-solid observations based on the glances we’ve had.

The positioning of the front pivots of the trailing arms is almost identical to the RZR – reaching virtually under the driver and passenger seats.

This positioning allows the use of forward mounted shocks that are about as long as what we’ve seen on some full race off-road vehicles (estimated 30-inches).

This length and positioning allows for what we would guess to be somewhere in the extreme range of 15 to 20-inches of travel at the rear axle, clearly exceeding the Razor XP.

A side effect of this long-arm rear end is an extended wheelbase. The Wildcat’s will be longer than the XP’s, so you can expect more stability at high speed – not a coincidence.

At the front, unequal length A-arms are used and they are long ones. Travel here will be in the 14-inch range, so the Wildcat is going to be wide. We expect power steering.

Power is rumored to be coming from a jacked version of the 1000 V-Twin with stainless dual exhaust, mounted super-low, behind the driver, in a lightweight tube chassis.

We’ve heard this mill is capable of 95-horses without much tweaking. There will be plenty more potential for tuners to wring out more. We can only guess at tranny and diff layout but we’re sure this setup will not be a design like the Prowler’s.

One more thing: This package is built for top speed. You can be sure it is targeted at the super-desert-racer-enthusiast market and Cat wants to make sure it does not disappoint.