WHATS NEXT FROM SUZUKI? 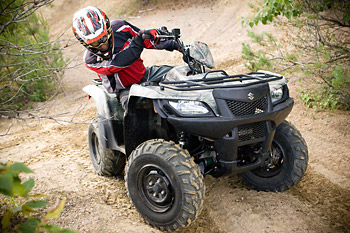 Its been quite a while since weve heard any big news from the offroad division at Suzuki. The Japanese manufacturer went silent a couple of years ago with no real signs of development in its ATV line up at all.

Its no secret that a few years ago our industry was smacked with a fiscal reality we have since been desperately trying to recover from. It seems we may be cresting a level plane now and looking forward to some form of recovery.

Suzuki recently announced it would be dropping its automotive division to focus on its offroad and marine divisions. This may not be awesome news for Suzuki car owners, but its a step in the right direction for Suzuki ATV enthusiasts.

With a massive dealer network across the USA converging on Las Vegas to see “new models” of motorcycles one can only hope that in the next year we may also see the next generation of the KingQuad or perhaps even a side-x-side from Suzuki.

Rumors of four more units in 2013 and an additional four units in 2014 bring a glimmer of hope to our dreams.

Sport utility is the meat and potatoes of the ATV market and the Suzuki KingQuad has always been a contender. We can only hope for big news from Suzuki in the not-so-distant future.