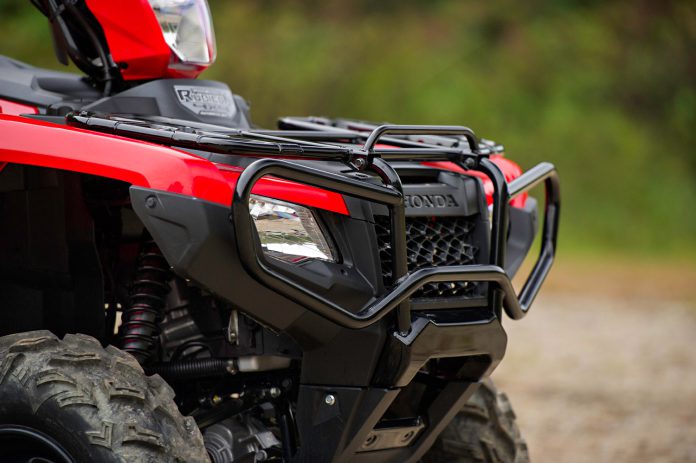 One of the most frequent emails and questions we receive from our viewers and readers is regarding Hondas seeming unwillingness to get competitive in the big bore ATV market.

In 2015 Honda brought the media out to ride its new Pioneer 1000 with a 999cc longitudinally mounted Unicam parallel twin engine featuring Dual Clutch Transmission and paddle shifters. This powerful engine was a huge step forward for Honda and proved the companys commitment to the Big Bore Utility Sport UTV class.

Like you, were seriously wondering when Honda will tuck a 1000 under the seat of the Rincon. Currently, the existing 680 in the Rincon is Hondas biggest bore engine in its ATV lineup putting itself in competition only with Yamahas 708cc single (which is another article in itself) giving Can-Am, Polaris and Arctic Cat free run of any consumer interested in power.

The Rincons bodywork hasnt changed in a decade either and compared to competitive models and even models in Hondas own lineup appears dated.

Wed like to see a new Rincon 1000 boasting the beefier bodywork of the Rubicon, and DCT to get the company on track with competitive models like the Sportsman 1000 XP and Outlander 1000.

Further to this, Honda needs to jump into the pure sport side-x-side category with an offering thats as aggressive as Yamahas YXZ1000R. This unit could feature a sport tuned exhaust, long travel suspension and the same 1000 mill and paddle shifters found in the Pioneer. The TRX 450 dominated the pure sport ATV race circuit and its about time Honda rekindles that competitive spirit with a pure sport UTV offering.