WOULD YOU RATHER: Sport ATV or Sport SxS 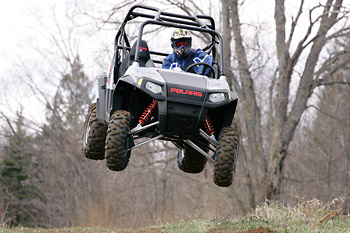 If you had the choice, where would you put your money?

There’s no question vehicles like the RZR, Wildcat and Commander are hot sellers. The hotness of them actually reminds us of nearly a decade ago when the Sport ATV biz was re-igniting.

Performance ATV sales had been dormant for over a decade with only Honda and Yamaha sticking around. When the new enthusiasm hit it wasn’t long before Can-Am, Polaris, Kawasaki and Suzuki were selling big numbers of stripped down, motocross-style 4-wheelers.

After a couple of years of rapid growth and then a recession, the numbers (which once were rumored to be 25-percent of the industry) have backed off considerably.

There are less OEMs building them and a pretty good glut of used ones out there in various states of repair or disrepair.

Apparently prices are still holding up and it’s relatively easy and cheap to restore them provided drivelines and engines are in reasonable condition.

Enter the SxS performance market. Yup, the prices on these are higher but it doesn’t seem to be slowing momentum. Something market planners don’t seem to take into account is the availability of used vehicles in this category.

Since the above-mentioned off-roaders are relatively new products in the marketplace, there isn’t a huge stockpile of worn-out or recently-bought RZRs etc, in the pipeline.

The best way to get your hands on one is to buy new – simply because good, clean mechanically sound ones are flat-out in very short supply.

What it means is if you bought one a couple of years ago, you can almost name your price for it. A pretty good investment really – especially if you’re thinking about moving up to something different.

You just can’t go wrong buying one of these side-x-sides and your money is pretty safe when demand is so high.