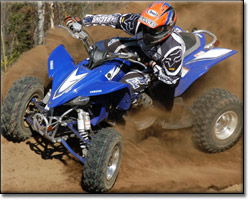 Despite an unbelievably successful racing record since its introduction, Yamaha knew the competition would be stepping up to take a bite out of the YFZ 450. The solution? Give us more!

For 2006, the engineers stepped up the displacement ten cubes, modified its 5-valve head for better fuel scavenging and added more magnesium and titanium than the Space Shuttle.

The 1.4mm increase in stroke added tons of bottom end for lugging down in those tight corners or ramping up to jumps. Underneath, the rear shock linkage was altered and the rear Kayaba now strokes an extra 13mm.

The brakes have been improved, the cooling system has more capacity and rider ergonomics have been drastically modified. All these improvements have been targeted at the bulls-eye Yamaha wants you to hit every time you ride it: Winning.

This Yamaha carries much more than just its feature load. Every YFZ comes with a racing heritage earned at hundreds of race events around the world. Look up racer in your Funk & Wagnalls and there’ll be a picture of the YFZ there. There’s a lot more than just sizzle with this blue-rare beefsteak. It delivers!

Dirt Trax Onlinehttps://atvmag.com
Check back frequently for new content and follow us on social media!
Previous articleHow Fast Is Fast Enough?
Next articleWhat Else Lights Your Fuse?