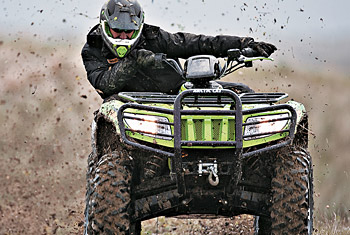 According to our own reader polls, you’re telling us power is a top priority when you’re making an ATV purchase decision.

Although not everyone is buying the top performing ATVs in each particular segment, prospective buyers are really putting power output high on their wish lists.

Many industry insiders believe the question we need to be asking is: “How much power is too much – and should the industry be exceeding the 80 hp mark in the sport-utility segment?”

Ten years ago, the biggest, most powerful ATVs used 500cc engines. Then came the 650s, the 700s and soon the standard became 750 to 800ccs. Today, we’re looking at exciting 850cc powerhouses and even one 1000cc ATV, Arctic Cat’s ThunderCat.

The argument could be sensibly made that, given the varied utility of Sport-Utes, particularly in mud and heavy-loaded conditions, bigger displacement engines are less taxed and will not be working overtime to deliver results. Could be, but when is too much power, too much?

The fact is, the horsepower and torque of even the big-inch, highest performing ATVs is pretty much unseen until the throttle is opened up.

In other words, even the most powerful ATVs are pretty calm and civilized at trail speeds and under normal working conditions. It’s only when the driver is pressing for power that the big displacement engines over-deliver.

It’s very similar to a normal automobile that can exceed speeds of 100mph but only does it when the driver makes the decision to do so.

It really comes down to how sensible the operator is and if discretion will be used with a big engine as to where the owner chooses to open it up and how much.

It’s a lot like life: Smart people don’t get hurt doing stupid things. Don’t blame the ATV if you get yourself wrapped around a tree. If you’ve got a few screws loose, you can do as much damage to yourself with a 150cc ATV as you can with a 1000.