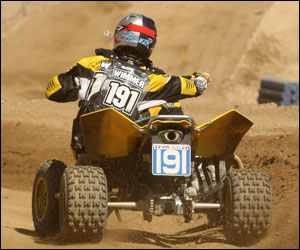 The ITP/Moose Racing AMA ATV Motocross Series opened its 12-race season at Glen Helen Raceway this weekend with a big win from Suzuki.

While the best quad racers in the world showed up for bragging rights, Team Rockstar / MSR / Suzuki / Yoshimura / ProTaper showed its dominance by earning first and second-place finishes on this famous track.

Suzuki teammates Chad Wienen, Doug Gust and Dustin Wimmer were all top qualifiers, fastest in timed practice. From high atop the victory podium, Wimmer claimed the number one spot on his Suzuki QuadRacer R450, while Wienen stood right next to him in second overall.

Gust rounded out the top five with a fine 5th place finish on the day.

Wimmer pulled out a huge lead in both motos dominating the competition in convincing fashion with 1/1 moto scores. Teammate Wienen’s 2/2 moto scores said the rest.

“We’ve been doing a bunch of testing and things just seem to be getting better and better” Wimmer said from the top step of the victory podium. “We have the fastest motors, Fox is doing a great job with our shocks, and the Suzuki QuadRacer R450 is just plain awesome.”

Team Rockstar / MSR / Suzuki / Yoshimura / Pro Taper Team Manager Kory Ellis said: “I don’t know how, but the Suzuki QuadRacers just keep getting better… the new model has an even more powerful engine and the suspension is great. The Suzukis and our riders look like the ones to beat… It’s the best possible way to start a season.”