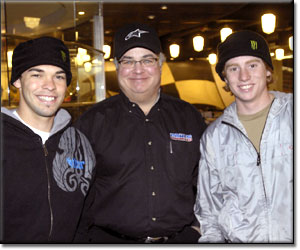 Each year, Parts Unlimited starts off the new Showcase season in Phoenix, AZ and follows it up at the Anaheim 2 Supercross with the largest showcase of the season.

With names such as; Jeremy McGrath, Chad Reed, Ryan Villopoto, Nate Adams and Twitch Stenberg in attendance, some of the dealers were treated to some one on one time with their heroes of the sport. Also in attendance were some of the industry’s leading vendors who were completely stocked with the latest 2007 products and knowledge.

Drawings and give-a-ways highlighted the night as people finished up their fantastic meal. One drawing in particular was hand-picked by none other than Ryan Villopoto himself. The winner received a Ryan Villopoto replica jersey in which he personally autographed in front of everyone before hand delivering it to the lucky winner.

Parts Unlimited would like to thank all the participating dealers who were in attendance as well as all the riders and look forward to seeing everyone at the races.