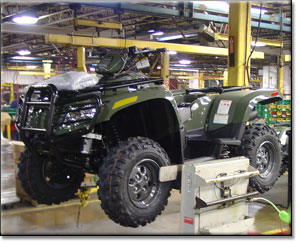 In 1996 Arctic Cat was the first to enter the ATV market with the largest bore ATV in the industry.

In the thirteen model years since the Bearcat 454 introduction, the Minnesota manufacturer is back on top with the introduction of the Thundercat 1000, while adding another milestone; producing their 500,000th ATV at the factory in Thief River Falls.

Arctic Cat CEO, Chris Twomey stated, We are very excited about our hard working employees hitting this build number, which is actually much higher if you included our Prowler line.

Ole Tweet, Arctic Cat ATV General Manager said, Producing our 500,000th ATV is something to be proud of. Not only have we advanced our product line in those thirteen years, but this ATV has advanced the industry. Our alternatively-fueled 2008 Diesel 700 is something no other OEM is producing.

Arctic Cat will be presenting the 2008 700 Diesel as the 500,000th ATV to roll off the line Tuesday, September 25th, at 11:15am in Thief River Falls. Also at this time, there will be an employee congratulations ceremony conducted by CEO Chris Twomey.