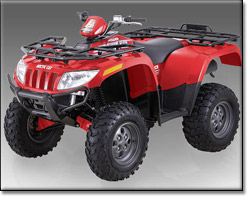 Arctic Cat called off their 2005 Press Launch slated this past June as a result of their prototypes being vandalized after a cross border excursion for a show in Mexico.

As of this writing we haven’t been able to sample the 2005 AC lineup including the all-new, domestically built 650 Hemi engine.

The Hemi is being assembled in Thief River Falls, Minnesota in an all-new facility dedicated to 4- stroke ATV engines.

We’re slated to visit the plant later this year and hope to bring you a full report.

Dirt Trax Onlinehttps://www.atvmag.com
Check back frequently for new content and follow us on social media!
Previous articleYF-Z Cleaning Up on Tracks
Next articleIndustry Numbers Are Staggering