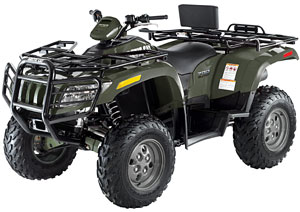 Slated for dealerships in early 2007, Arctic Cat has completed development of a twin-cylinder diesel ATV, the only one on the market.

The Arctic Cat diesel Super Duty ATV, based off the popular TRV 4×4 platform, will be aimed at markets around the globe. In fact, that is how the whole concept started.

In European markets, half of passenger vehicles and most off-road vehicles rely on diesel fuel that can be up to 25% the cost of gasoline. Other users of the ATV are the military, which are working toward one common fuel (JP 8) for all their vehicles, others include American farmers and ranchers who continue to use diesel in all their machinery.

If the term Bio Diesel has caught your attention, Arctic Cat tested the new ATV on the alternative fuel made from vegetable oil or animal fat with the Agricultural Utilization Research Institute (AURI) and the Minnesota Soybean Growers.

“Arctic Cat was very impressed with B20”, says Ole Tweet, VP of New Product Development. “The blend burns cleaner than conventional diesel, producing fewer carbon dioxide emissions and lower levels of hydrocarbons, carbon monoxide and particulates. That complements Arctic Cat’s stewardship goals”, Tweet says. “We’re trying to reduce the impact of our ATV’s on the environment and we like the idea of making an ATV that could run on renewable fuel grown by farmers, some of our best customers.”