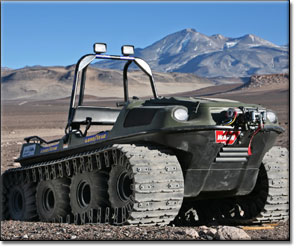 ODG is pleased to announce the outcome of the ARGO’s high-altitude performance testing carried out on one of the world’s highest volcanoes, in Chile last month.

The Matthias Jeschke Extreme Driving Team reached an all-time high as they set the record for climbing the Ojos del Salado Volcano in Chile on March 13, 2007.

Led by German off-road expert Jeschke, and accompanied by two 8 x 8 ARGO Avengers EFI for support, the team of 12 reached the extraordinary height of 6,646 meters (21,805 ft.) with no assistance or oxygen, in two Jeep Wrangler Unlimited Rubicon 3.8 V6 vehicles. To put this incredible achievement into perspective, the mighty Mt. Kilimanjaro is 5,895 meters (19342 ft.) high at its peak.

In this daring attempt, the ARGO Avengers became the first 8×8 off-road utility vehicles ever to reach an altitude of 5,900 meters (19,357 ft.), a feat for both the driving team and the designers of the ARGO.

The team had a few challenges on the way up but always worked out solutions to reach the goal. Matthias Jeschke and his team made some adjustments to the engine and kept the ARGOs in high performance mode. At the same time, the ARGOs provided reliable support to the team, carrying the team doctor and all medical supplies.

After a strenuous climb in all types of weather and conditions, including intense skin-burning sun, bitingly cold winds, sandstorms that completely coated the vehicles and caused eye injuries, boulders and protruding spears of icy snow, dangerous fissures in the slowly melting glacier, and temperatures that dipped to minus 20◦ Celsius, the team earned its place in the Guinness Record Book at 6,646 meters.

Another advantage of the EFI model’s electronic fuel injection is its improved fuel economy, which meets both EPA and CARB standards. It also features an effective throttle response and is reliable in cold weather and in high altitudes. On-board diagnostics helped the technicians with en route maintenance needs. The ARGO uses regular unleaded gasoline.

The invaluable experience gained from this high altitude climb will be used to further develop the ARGO’s capabilities in extreme conditions and altitudes.

The ARGO has been a trusted partner worldwide in natural resource exploration, utility maintenance, communications, and by search & rescue organizations.

This versatile all-season workhorse can also be adapted to suit a remarkably wide range of custom applications.

The ARGO will be the official transportation vehicle for the show management team at Europe’s largest Off-road show, “Abenteuer & Allrad” in Bad Kissingen, Germany, from June 7 – 10, 2007. The Jeschke Team will be presenting all of the vehicles used in the Volcano climb, as well as the official Search & Rescue ARGO of Quadmedics. A 45-minute documentary about the word record event will be presented on a large screen.