Ballance Back on Top at GNCC 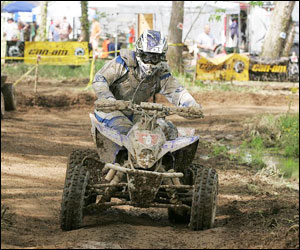 “Right now it’s not even about the championship,” said Ballance after logging possibly the longest burnout ever seen at a GNCC on the podium. “I just need to start getting wins and then we can focus on the championship. It was a great battle today and I’m glad to come out on top of it.”

The duo passed each other over and over while Borich began a charge from the back after getting stuck on a hill. But with just a few miles to go, McGill’s machine suddenly quit due to an electrical problem, ending his win streak. His teammate Kiser, running third, ran into the same problem as well.

Ballance then held the lead, but Borich put in one last charge. The finish came down to a classic “Killer B’s” battle, as Borich got to Ballance’s rear wheels but came up short of making a pass.

Cook logged another consistent ride to net his third podium of the season. National Guard’s William Yokley took fourth ahead of ATVRiders.com’s Jarrod McClure, who turned in his best result ever with a fifth.

McGill was unable to get his machine refired and did not finish the final lap with the leaders. He was credited with 18th in the XC1 class and 103rd overall.

Kiser was able to nurse his machine home eighth in the class. McGill does still hold the GNCC points lead, but Cook has narrowed the gap to 13 points in the XC1 class. Ballance and Borich climbed to third and fourth in the rankings.

In the XC2 Pro-Am division, Joshua Kirkland collected the Rekluse Holeshot Award, but GT Thunder Yamaha’s Don Ockerman was able to get the early lead. Ockerman battled with Kyle Martin and Spencer Dickerson and held on to grab his fourth win of the season.

Sam Williams topped the U2 class on a Kawasaki. Can-Am riders won the rest of the utility classes.

The Can-Am Grand National Cross Country Series continues with the Wiseco John Penton GNCC in Millfield, Ohio on May 10 and 11.