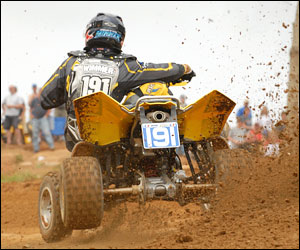 The Center Valley, Pa. native grew his points lead and is looking very good for a possible series title.

Wimmer ran a smart and tactical race on the challenging track. His 2/2 moto scores ended up clinching 2nd overall and a good points harvest.

“In the first moto, I rode steady and didn’t take any chances. It’s a narrow track and hard to pass cleanly on.

My Suzuki QuadRacer was blazingly fast and when I saw a lot of the points contenders struggling, I just brought it home.”

Teammate Doug Gust (#55) wanted to recreate his win of the previous round, but with a 3-7 was only able to hang on to some hard earned points with a 4th overall. “In the second moto I was in last place after a tangle, but my QuadRacer R450 took me all the way up to 7th place at the finish,” Gust said.

“It was a good weekend,” Team Manager Kory Ellis explained. “We were able to get through and hold on to as many points as possible. Dustin is first and Doug is in second in the points chase, so I’m happy with that!”

Dirt Trax Onlinehttps://www.atvmag.com
Check back frequently for new content and follow us on social media!
Previous articleCREAMER STEPS IT UP AT BIRCH CREEK
Next articleButler and Holz Take Firsts at WORCS Round 4