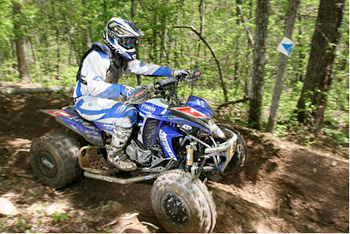 Spectator passes are $15 for the full weekend, with Pro pit access and Pro autographs included at no additional charge. On both Saturday and Sunday, Youth riders race at 8 a.m., Amateur riders race at 10 a.m., and the Pro and Pro Am Classes compete at 1 p.m. For more information on the racing series, check out the official series web site at www.GNCCRacing.com.

More than 1,500 competitors are expected to compete this weekend in both Amateur and Pro classes. Riders from all over the world compete in the GNCC Series, bringing international intrigue at all levels.

In addition to the on-track action, this weekend’s event will also feature an expansive midway, as well as demo rides of new Can-Am ATVs. Also, Yamaha will unveil its all-new 2009 YFZ450R racing ATV with a display on Saturday. On-track, Unadilla offers some of the best vistas on the tour from which to watch the action. The track includes Unadilla’s motocross track, as well as mud, rocks, hills and trails through the woods surrounding the venue.

“The Unadilla track is unique on the tour as it offers our fans some of the best viewing opportunities of the racing action,” said GNCC Trail Boss Jeff Russell. “In addition, the Pro pit areas will be accessible to those attending, allowing them to get an up-close view of the racers and their highly tuned machines.

“The use of the motocross track also injects another level of competition into the Unadilla race,” added Russell. “The tight, high-speed turns, as well as big-air jumps are certain to make for an exciting show.”

Ballance, riding a Yamaha, has dominated this season, earning three wins, as well as three runner-up efforts. Heading into Unadilla, however, Ballance is still recovering from broken ribs sustained in a practice crash several weeks ago.

Adam McGill, who won the most recent GNCC in runaway fashion, is well on his way toward beating back a midseason slump. Sitting second in points, McGill is just 26 markers behind Ballance. McGill has four wins this season, the most of any ATV competitor, as well as a single runner-up finish.

Rookie pro Brandon Sommers is hungry for his first ever GNCC victory. Consistency has placed the Yamaha rider third in points. With four top-three finishes, it will only be a matter of time before the Millersburg, Ohio rider gets to tread to the top step of the podium.

The Can-Am Grand National Cross Country Series is the largest off-road racing series in the United States. The top Pro racers make a lucrative living in the sport, reigning in six-figure salaries and endorsements, as well as a share of a $130,000 in prize purse and more than $3 million in contingency and bonus monies.

GNCC events also offer classes for amateur riders of all skill and experience levels. Four-wheeled ATVs will compete throughout the day on Saturday, September 27, and dirt bikes will race on Sunday, September 28. Riders can sign up at the track. The amateur racer entry fee is $40.

This weekend’s race is also a full points-paying event for the WNYOA Series. Also, WNYOA will be arranging peewee racing for 50cc bikes and ATVs on a separate course.

The race is also being co-sanctioned by the Atlantic Grand Prix (AGP).

Dirt Trax Onlinehttps://www.atvmag.com
Check back frequently for new content and follow us on social media!
Previous articleNEATV-MX Round 8
Next articleFMF Announces New Director of Marketing