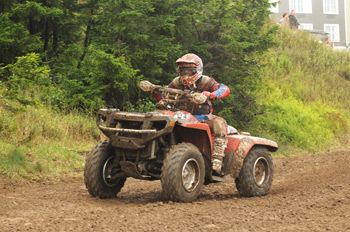 The Factory Polaris/Rath/Dunlop Team headed from Minnesota to another well-known winter haven, Snowshoe Mountain, last weekend to compete in the Round 10 GNCC Cross Country event.

This may be a ski resort but last weekend it turned into an ATV Wonderland as the competitors, teams and fans made the way up the mountain for some spectacular views and some amazing racing. With asphalt starts and ski lift viewing it was a beautiful thing!

Frank Batista a well-known TT/Flat track racer opted to switch out his Extreme Dirt Track tires and lightweight slick race machine for the likes of a full on 4X4 Polaris Utility Race ATV for the 2008 GNCC Series.

Batista brought his talent and winning ways aboard his Sportsman 800 and went to work. Learning the ropes and a new machine was a little easier with how well the Sportsman handles, along with the performance it puts on the track.

Batista raced his way to the podium with a well-deserved second-place finish in the Open Utility 4×4 class. This may be his rookie season, but that was not apparent this past race.

With rain the night before and a heavy dense fog in the early AM, it was almost quiet as the riders headed for the line to take part in a very unusual asphalt starting pattern.

ATV racers were lined up as far as the eye could see and with a quick wave of the hand, flights were off and racing in five second intervals. Batista launched his Sportsman off the line and around the corner heading for the fourteen-mile loop.

Shortly after, Daryl Rath’s line was up and he was ready to take his turn at the treacherous course. Unfortunately, Rath was unable to avoid trouble, and was unable to finish the race with his teammate.

Batista raced an impressive pace through the entire course and was able to score his highest finish this season. Batista stated, “I was ready to accept the challenge of racing something new, in a new discipline.

After riding the Polaris Sportsman and working with The Rath Team I knew I could I could put together a winning season. I am determined to continue moving forward as I have my goal set on a first place finish.”