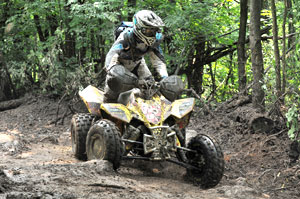 Team Rockstar / Yoshimura / Suzuki’s Chris Borich scored his second win of the season with a strong come-from-behind victory at Round 9 of the GNCC ATV series in Somerset, Pennsylvania.

After a mid-pack start, Borich wasted no time heading to the front. By the completion of the first lap, he was well on the move forward.

On the second lap he made a successful pass for the lead. While the racing remained tight at the front, Borich would never surrender the lead and finished the race on the top step of the podium.

“The race went pretty good,” said Borich. “We had a mid-pack start but got to the lead on the second lap and just held onto it from there!” Borich also had praise for the Suzuki QuadRacer R450 in a race that saw many riders plagued by mechanical problems. “The Suzuki worked awesome, all I had to do was ride it!”

The winning result moves Borich up to fifth in the points standings. Two points hold the difference between third and fifth place.

Borich and Team Rockstar / Yoshimura / Suzuki look forward to the next round of the GNCC series in Snowshoe, West Virginia on September 13th.