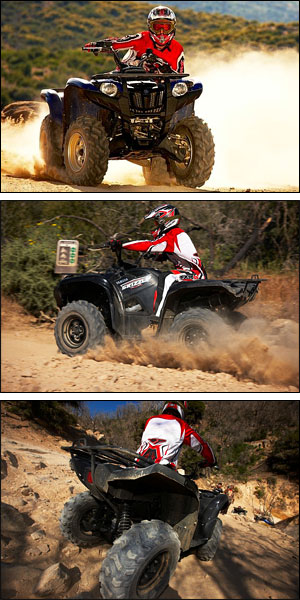 Yamaha has aggressively expanded its Grizzly lineup featuring the popular EPS power steering with the introduction of the Grizzly 550 FI.

The 550 Grizz is a spitting image of its big bro and is poised to take on Honda’s Foreman, which also features its own unique brand of power steering.

In comparison, the most immediate feature that puts the Grizz on top is its fully independent rear suspension featuring a class-leading 9.5 inches of travel out back– something absent on the Honda.

The front of the 550FI also features the Yamaha-exclusive wideArc front suspension, which offers a claimed five inches more of useable ground clearance up front.

If power steering doesn’t do it for you, you can opt for the more budget-conscious version of the 550 FI Grizzly without power steering for about $700 US less. We’ve been riding the 700 FI Grizz all season and its one of our favorites around the office.

Fuel injection makes a noticeable difference in throttle response throughout the powerband. It also delivers consistent power at higher elevations as the Fuel Injection system can detect and compensate for changes in altitude delivering an accurately measured burst of fuel every stroke.

The 550 FI Grizzly also features an all-new open gate shifter, which allows the rider to easily see what gear he’s in and is also displayed clearly on the LCD gauge cluster.

Watch for a full report in an upcoming issue of All-Terrain Vehicle Magazine!

Dirt Trax Onlinehttps://www.atvmag.com
Check back frequently for new content and follow us on social media!
Previous articleJustin Waters Takes It on the Road
Next articleBORICH WINS BIG AT MOUNTAIN RIDGE