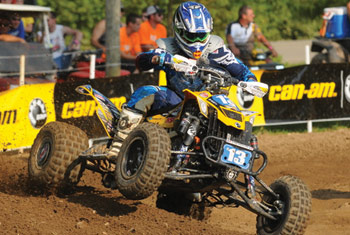 Battling hard in the Tennessee heat and humidity, Natalie rode his DS 450 to a third overall finish putting him on the podium to finish the season with 3-4 moto finishes at the famed Loretta Lynn motocross track.

“What a way to finish the season, John’s been working very hard this year and he definitely deserved this podium finish,” says Jimmie O’Dell, Racing Manager for Can-Am ATVs at BRP. “With this final motocross race of the season, I would like to take time to thank all of our fans, our Can-Am X-Team racers and our partner teams, Warnert Racing and Motoworks. Without everyone involved week after week none of this would be possible. We continue to thank everyone involved at all levels for a successful season!”

In the Pro ranks, three Can-Am DS 450 racers placed in the top 10 for the championship. Natalie, along with teammate Cody Miller and Team Motoworks / Can-Am rider Jeremy Lawson, all finished in the top 10 in 2009. Can-Am finished the 2009 season with three overall podiums.

“It felt really good to finish the season on the podium and I think next season we are in line for a championship,” comments Natalie. “I plan to take about a week off and get right back to training and riding. Since I had to have surgery on my shoulder last season I didn’t get to train as hard as I wanted to, but next year will be different!”

In amateur racing action at Loretta Lynn’s, Cole Henry of Petersburg, VA took second in the 450 A class and third in the Four-Stroke A class aboard his DS 450. He won motos in both classes during the weekend.