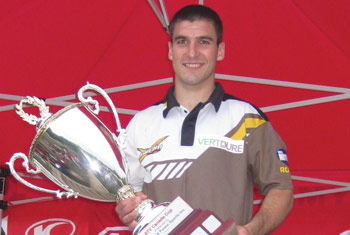 Can-Am X-Team Racer, Richard Pelchat, took the Canada Cup ATV Championship in convincing fashion as he took the holeshot in both moto races in the final round of the championship series aboard his DS 450 EFI ATV.

The final round of the championship was held near Parry Sound, Ontario, where Pelchat led both races from start to finish to take the weekend overall.

“Richard Pelchat has worked hard all this season and it certainly paid off for him at Parry Sound,” says Jimmie O’Dell, Racing Manager for Can-Am ATVs at BRP. “With this Canadian championship, Pelchat is our top DS 450 racer in Canada; we look forward to future results from this dedicated racer. This is a very important championship for everyone at BRP, we are proud to have Pelchat on a Can-Am ATV.”

Pelchat followed up his championship with a strong sixth overall at the penultimate round of the 2009 ITP/Moose Racing AMA ATV Motocross Championship at Red Bud Track and Trail in Michigan.

“I’m proud to bring home the cup for Can-am,” says Pelchat. “Canadians all grow up dreaming of winning the Stanley Cup for a professional hockey team; I guess the name of the championship fits us perfectly! The people behind the series were really nice and I am sure that it will continue to grow in the future.”

Pelchat and the rest of the Can-Am X-Team motocross racers will contest the final round of the AMA ATV Motocross Championship on August 15 and 16 at Loretta Lynn’s in Tennessee. For more information on Can-Am racing, our 2009 contingency program and amateur DS 450 support program, please visit www.can-amxteam.com.

Bombardier Recreational Products Inc. (BRP), a privately-held company, is a world leader in the design, development, manufacturing, distribution and marketing of motorised recreational vehicles. Its portfolio of brands and products includes: Ski-Doo and Lynx snowmobiles, Sea-Doo watercraft and sport boats, Evinrude and Johnson outboard engines, direct injection technologies such as E-TEC, Can-Am all-terrain vehicles and roadsters, as well as Rotax engines and karts. With manufacturing facilities on three continents, BRP products are distributed in more than 80 countries.

Dirt Trax Onlinehttps://www.atvmag.com
Check back frequently for new content and follow us on social media!
Previous articleWimmer Looking To Pull Off Stunning Victory
Next articleIndustry’s Most Advanced 4-Season Track Kit