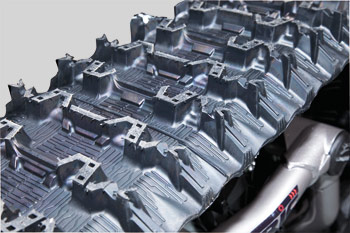 TRIC track kits are now available for Grizzly 700 and Grizzly 550 exclusively through Yamaha dealers across Canada.

The TRIC kits feature a special gear ratio for each Grizzly application and the latest design in aggressive track patterns from Camoplast to maximize traction and floatation in both snow and mud.

The front pods incorporate Camoplast’s ‘Flextrack’ technology to reduce steering effort and aid in both off-camber and deep powder performance.

The suspension frame is based on the proven Camoplast Tatou 4S design and features maintenance free sealed cartridge bearing suspension wheels. The TRIC system also offers a wide range of adjustment for the track approach angle, and steering axis which enables Grizzly ATV’s to optimize track performance and handling in practically any condition.

This is especially important when the transition is between snow and dirt.

Some additional features found in the TRIC track system are:

There is also an all new TRIC quick release plow system with an exclusive extension bracket designed to complement the TRIC track system. The new TRIC plow features a one-hand disconnect mechanism, a foot released angle plate and a 54 x 18 inch blade made of eleven gauge, reinforced steel.

All together, a Yamaha Grizzly EPS ATV outfitted with TRIC tracks and plow is the ultimate weapon to ward off the worst a Canadian winter can throw at you.