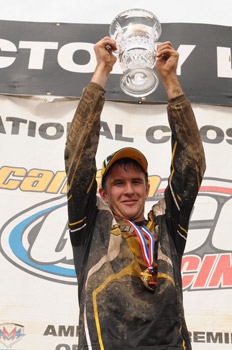 This past weekend was a remarkably successful weekend of racing for all Can-Am X-Team racers. At the Unadilla GNCC, BRP Can-Am swept the overall wins for both the morning and afternoon sessions, in the process giving the DS 450 EFI ATV its first XC1 Pro-class win.

And out west, the DS 450 also was crowned the overall champion in the WORCS racing series. In the northeast, the Can-Am Outlander 800R EFI ATV was awarded the Rock Maple Racing Quad Terrain Open West championship and to the south, the DS 450 X model took home the Virginia A-Class state championship.

“This has easily been the most successful weekend of racing our Can-Am X-Team has ever had,” said Del Bohlman, Product, Media Relations and Racing Manager for Can-Am ATVs at BRP. “To date we have at least six championships on Can-Am ATVs and aiming for? more. The wins at the Unadilla GNCC and at the Honey Lake WORCS race were a special part of this weekend of success on the track.”

Team Warnert Racing / Can-Am racer Chris Bithell pulled off a hard-fought victory on his DS 450 in the XC1 Pro class. Starting from dead last after the start, Bithell rode a strong race and worked himself into the lead after three laps.

For the next two laps he remained at the front despite hard challenges from the fastest woods racers in the world. Bithell’s win gives the Can-Am DS 450 its first GNCC win and overall. That win, combined with X-team racer Bryan Buckhannon’s overall aboard his Outlander 800R ATV in the morning race session, marked a clean sweep of the Unadilla GNCC overalls.

Team Motoworks / Can-Am rider Josh Frederick won his second WORCS Pro-class championship by winning the Honey Lake WORCS race. Frederick piloted his DS 450 to the holeshot and never looked back. His teammate, Brandon Smith finished behind him and in the Pro-Am class, teammate Dillion Zimmerman took the win. It was a great weekend of racing for the Motoworks team.

Amateur racer Cole Henry has been tearing up the track at both the local and national level all season aboard his DS 450 X.

This weekend he took the Virginia A-class State Championship at Birchcreek Raceway near Danville, VA. Henry recently moved to the A class and has been undefeated ever since.

And finally, in the Rock Maple Racing series, Jamie Bougher was recently crowned the RMR Quad Terrain Open West champion for his wins on the Outlander 800R ATV. What an amazing weekend of racing for the Can-Am racers.

“It feels great to win. I knew we could do it! Everyone was cheering. It was great to have that kind of support.”

The next GNCC race is the Powerline Park GNCC near St. Clairsville, Ohio on October 11. While the next and final WORCS race is October 24 to 26 near Taft, CA. Visit www.canamxteam.com for more details and race results.