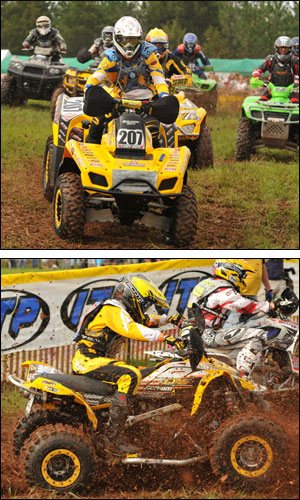 Team Looney Tuned Exhaust (LTE) / Can-AmTM knew it was only a matter of time before Women-class racer Lexie Coulter visited the podium for the GNCC morning session. Hard work and a never-give-up attitude have characterized the first three rounds for Coulter.

At the Big Buck GNCC near Union, S.C., everything paid off as Coulter flirted with an overall all morning and was third across the line on her BRP Can-Am DS 450TM ATV when the checkers flew.

“It seems like everyone on the Can-Am teams were pulling for Coulter as she came so close to getting on the podium each of the first three rounds” said Del Bohlman, Product, Media Relation and Racing Manager for Can-Am ATVs at BRP. “Everyone was excited to see her put the DS 450 on the morning podium, the hard work put in by Coulter and Team LTE is paying off.”

Can-Am X-Team member Bryan Buckhannon aboard a Can­Am Outlander˙ 800 ATV was the “first of the rest” as he rode to fourth overall and the 4×4 Open class win. Along with Buckhannon, two other Can-Am riders took class wins in the morning. Michael Swift of Team Warnert Racing / Can-Am absolutely dominated the 4×4 Limited class with a nearly 20-minute class win on his Can-Am Outlander 800 ATV.

Swift’s teammate, Cliff Beasley, took the win on his Outlander 500 in the 4×4 Lites class followed closely by Jerime Dudding of Team LTE / Can-Am, also on an Outlander 500 ATV. Scott Kilby of Team Warnert Racing / Can-Am finished second in the 4×4 Open class on a Can-Am Outlander 800 ATV.

Round four brings the racers to the famed Loretta Lynn Dude Ranch in central Tennessee for the Loretta Lynn GNCC on April 26.

Dirt Trax Onlinehttps://atvmag.com
Check back frequently for new content and follow us on social media!
Previous articleKTM’s Adam McGill Makes it 3 in a Row
Next articleWhich Pure Sport?