KTM’s Adam McGill Makes it 3 in a Row 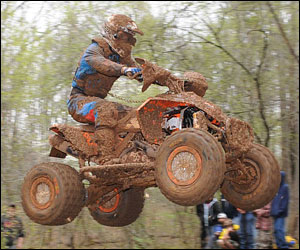 KTM’s Adam McGill won the fourth round of the ATV GNCC Series to make it three wins in a row.

The muddy 12-mile loop was one of the most challenging so far. The rain poured down all day and stopped right before the main event but left the course quite wet.

McGill, who has been known for his good starts so far this year, had the opposite luck when the flag dropped. “I rounded the first turn in 18th! I just put my head down and started to pass people,” remarked McGill about his start.

Fortunately, a bottleneck at the start of the race helped McGill pass quite a few riders when he saw an outside line to get around the group. Meanwhile, his teammate, Taylor Kiser, found his way up front and was running in the top three.

By the end of lap one, McGill had charged his way into sixth approximately 20 seconds off of the current leader Brandon Sommers. Then miraculously McGill passed for the lead on lap three and never looked back. Kiser, who had been running the majority of the race in third, had to pull off due to a mechanical issue.

When the checkered flag flew, McGill came around first to take home his third win of the season over Bryan Cook. McGill now has a comfortable lead in the series points.