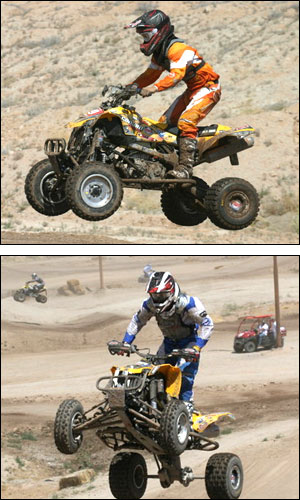 Round Two saw the sun shine brightly on the Pro class as it lined up on the Arizona Cycle Park starting gate near Buckeye, Ariz. Smith rode his BRP Can-Am DS 450TM ATV and ended up finishing second in the race after he and the eventual winner pulled away from the rest of the field. Teammate Frederick, also on a DS 450, passed several riders and finished fourth.

“We are well into the racing season, and to see successes like this for the initial effort of the DS 450 ATV is encouraging,” said Del Bohlman, Product, Media Relation and Racing Manager for Can-Am ATVs at BRP. “The entire Team Motoworks/Can-Am racing team, from riders to owner, are committed to winning a Quadcross championship.”

The next ITP Quadcross race is on May 4, at the Racetown 395 track near Adelanto, Calif.

Dirt Trax Onlinehttps://www.atvmag.com
Check back frequently for new content and follow us on social media!
Previous articleKTM’s Adam McGill Makes it 3 in a Row
Next articleWhich Pure Sport?