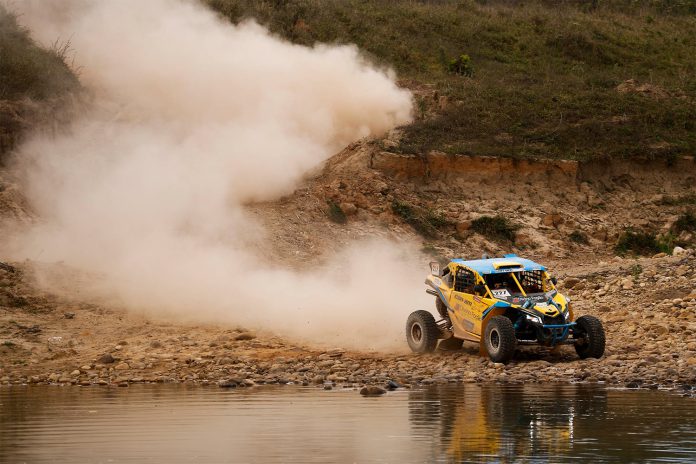 In the United States, Can-Am / XPS Lubricants drivers Phil Blurton and Kyle Chaney outlasted stiff competition and overwhelming conditions to record overall endurance racing wins in Nevada and Iowa, respectively, with their Maverick X3 Turbo R side-by-side vehicles. At the 2018 Rally dos Sertões in Brazil, which wraps up Friday, Aug. 25, Can-Am racers own the top eight spots in the standings after three stages of action.

Blurton Repeats As BITD Vegas To Reno Champion
Phil Blurton (Can-Am / XPS / No Limit RD) and co-pilot Beau Judge won the Pro UTV Turbo class and UTV overall with the No. 944 Can-Am Maverick X3 side-by-side vehicle at the 2018 BITD Vegas To Reno race. On paper, the back-to-back Vegas-To-Reno wins is outstanding in its own right, but when you factor in the number of competitors, brutal terrain, the race length and the fact that Blurton had to come from nearly 39th place in the class to finish in front of everyone was incredible. A 30-minute delay almost cost Blurton and Judge a chance at a win, but they rallied hard all the way to checkers and were rewarded with victory and the overall class points lead in the BITD series.

“So proud of the hard work of our No Limit RD Race Team and support crew,” stated Blurton. “They are the most dedicated team and we could not accomplish such greatness without them and the support of our sponsors.”

Don Higbee (Can-Am / Driven Powersports) piloted his Can-Am Outlander 4×4 ATV to a third-place finish in the ATV Pro class against a field of sport quads. Higbee, who ended the BITD season in third place, and co-pilots Jose Torres and Adolfo Arellano posted a time of 10:39 to set an event record for a 4x4ATV.

The Heartland Challenge, a difficult day-night, four-hour endurance race with a mix of short-course, cross-country and endurocross, forces man and machine to be ready for almost anything. Chaney, coming off a Lucas Oil Midwest Short Course Series win the weekend prior, had a little momentum on his side. Chaney, co-pilot Josh Martell, and their XPS-themed Can-Am Maverick X3 side-by-side vehicle proved up to the task. They took the lead about a mile from the start and then led the rest of the way. It was Chaneys second consecutive Heartland Challenge UTV race win. Can-Am racers also won the 900 class (non-turbo), posting a podium sweep, in Iowa.

Brezina Grabs LACC Victory
Can-Am / S3 Powersports racer Logan Brezina put the hurt on the competition in Louisiana, winning the A class and side-by-side overall at Round 7 of the LACC series in Wilson, La.

“It was an awesome weekend for S3 Racing — podiums everywhere. I was fortunate enough to bring home the win yesterday,” said Brezina. “My Can-Am Maverick X3 side-by-side vehicle was absolutely on rails.”

Can-Am / Varela Rally Team driver Reinaldo Varela and co-pilot Gustavo Gugelmin, winners of the 2018 Dakar Rally, have the early lead after winning stage 1 and keeping their advantage through stage 3 in South America. The No. 203 Maverick X3 side-by-side, driven by Enrico Amarante and Breno Rezende is currently second overall.

All seven stages of the Sertões Rally equal roughly 3,601 kilometers (more than 2,200 miles). The champions for all classes will be determined by Aug. 25 in Fortaleza.

About BRP
We are a global leader in the world of powersports vehicles and propulsion systems built on
over 75 years of ingenuity and intensive consumer focus. Our portfolio of industry-leading and distinctive products includes Ski-Doo and Lynx snowmobiles, Sea-Doo watercraft, Can-Am on- and off-road vehicles, Alumacraft boats, Evinrude and Rotax marine propulsion systems as well as Rotax engines for karts, motorcycles and recreational aircraft. We support our lines of product with a dedicated parts, accessories and clothing business to fully enhance your riding experience. With annual sales of CA$4.5 billion from over 100 countries, our global workforce is made up of around 10,000 driven, resourceful people.