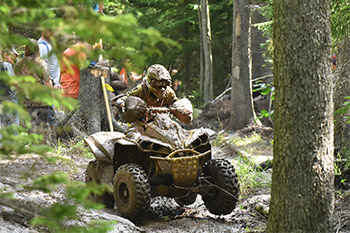 Despite the severe flooding, numerous road closures and a drenched course, round nine at Snowshoe Mountain Resort, known as “Americas Toughest Race,” was held as scheduled and lived up to its billing.

Buckhannon, the defending class champion, posted his first 4×4 Pro class win of the year and also took the top spot on the 10 a.m. overall podium. In the last three rounds, Buckhannon has one win and two runner-ups to move into sole possession of fourth place.

Cunningham earned a spot on both the morning and 4×4 Pro podiums. His third-place finish stretched his current class points lead to 24 going into the GNCC summer break. The GNCC series resumes September 10-11, in Unadilla, N.Y.

Tim Farr piloted his Can-Am Maverick 1000R through blinding dust to win round four of the UTV Rally Raid series. Farr won in impressive fashion, as he was the only racer who did not take a pit stop during the grueling four-hour event.

Cody Taylor earned three podiums in the Louisiana Cross Country series at Huff Bend Highland Run. He won the UTV A class in his Can-Am Maverick X ds Turbo and also took second in the ATV A class with his Can-Am Renegade 4×4.

Dirt Trax Onlinehttps://www.atvmag.com
Check back frequently for new content and follow us on social media!
Previous articleWHAT’S UP WITH THE ATV BIZ?
Next article GET A LOAD OF THIS BAD BOY!