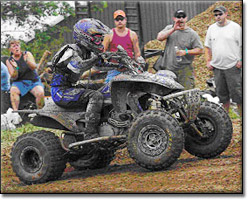 Traci Cecco won her seventh race of the year and wrapped up the 2006 GNCC ATV women’s championship on Saturday, June 24 in McHenry, Maryland.

With four races left in the series, the YFZ450 rider has accumulated 176 points and an unassailable lead over Angel Atwell, also on a YFZ450. Including Cecco and Atwell’s machines, Yamahas accounted for six of the top 10 finishers in the women’s event.

The morning race was held at The Wisp, a ski resort noted for its steep, rocky terrain. “It was a good day,” Cecco said afterwards. “I pulled the holeshot, won the women’s race, took the overall win and the championship. This is the second race in a row that has gone so well. I attribute it to my bike always coming to the track well prepared. I do my training, but GNCC is also mental and you have to have your head on right.”

In the Pro race on Saturday afternoon, YFZ450-mounted Bill Ballance battled with series rival Chris Borich throughout the four-lap event, with the pair rarely more than two seconds apart over two hours.

Ballance completed the first lap in third place behind Chris Jenks and Borich, then moved up to second on lap two. Ballance took the lead for good on the fourth and final lap, opening up a four-second gap over Borich at the flag.