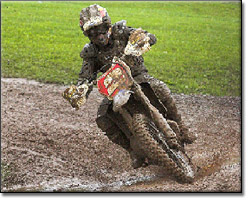 Hawk topped series leader Juha Salminen and Justin Williamson – also aboard a Yamaha – to take a convincing win in some of the worst racing conditions imaginable. He still commands second place in the standings with four races left to go in the 2006 GNCC season.

The steep, rocky terrain was made tougher by rain that started Saturday night at The Wisp ski resort where the event was held, and which continued right through Sunday’s six-lap, 60-mile race.

Hawk got off the line in sixth place with fellow YZ250 rider Charlie Mullins in the lead. He worked his way up to fourth after the first lap, when all the leaders pitted for new goggles, then passed Salminen on lap two, only to lose the lead when he stopped for another set of goggles.

In fact, Hawk stopped every lap for new goggles – but his clear vision finally paid off as he took the lead for good on lap four. Hawk throttled his YZ250 to a minute’s lead by the finish.

“That was probably the hardest race I’ve done in a long time,” said Hawk after the event. He celebrated in good humor by making a “snow angel” in the mud. Well done Barry!