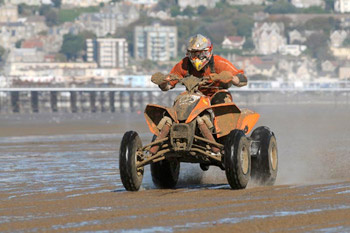 I’m really looking forward to competing in the quad race at the final GNCC of the year, says Knight, a member of Team Red Bull KTM. I’m not expecting any great results; it’s just a bit of fun. I’ve only raced a quad at Weston Beach Race, and that’s a lot different than a GNCC course. I’m just hoping to finish and have some fun doing the race. Then, on Sunday, I’ll get some time to say goodbye to all the friends I’ve made during the last two years.”

After claiming the 2007 and 2008 GNCC Championship on bikes, and winning 14 out of the 24 races in which he competed, next season Knight will return home to compete in Europe’s World Enduro Championship. This weekend’s race may be the last opportunity to see the Isle of Man native compete in the U.S.

The top ATV stars look forward to a friendly challenge from Knight, who recently finished fourth out of 374 entries racing in the ATV portion of the Weston Beach Race in England.

No matter where he finishes, I would like to see him put his full heart into it and push hard for the whole two hours, says GNCC ATV Champion Bill Ballance. That way he’ll really get the full experience and know what we do.

Barry Hawk is the king of the GNCC crossover, having notched seven-straight GNCC ATV titles before switching to bikes and then claiming that championship in 2003.

If he goes out there to have fun, it will be good for him, says Hawk, who rides for the Am-Pro Yamaha bike team. If he expects to run in the top ten and prove a point, it will be tough, because he doesn’t have enough time on the machine to do that. I mean, if I were to race Indiana on an ATV, with all the experience I have, I’m not sure I could get a top ten, just having a few weeks to get ready.

GNCC rules do not allow a pro bike racer to compete in Saturday’s ATV event, so Knight will skip Sunday’s bike race. That makes FMF Suzuki’s Paul Whibley the favorite after winning the previous GNCC in Ohio while Knight competed at Weston.

Whibley has three wins this season and sits second in the GNCC standings. His young Australian teammate Josh Strang, however, is hungry for his second win of the season.

I refuse to finish off of the podium, says Strang. If it comes down to it on the last few laps, I’m going all in.

Suzuki packs two other contenders in Charlie Mullins and Jimmy Jarrett, who were third and fourth, respectively, at the previous GNCC event in Ohio. Red Bull KTM’s Nathan Kanney is still hungry for his first win of the season, and the orange team will also send AMA National Enduro Champion Mike Lafferty to Indiana to replace Knight on Sunday.

Lafferty competed in the GNCC Series full time for years and has won GNCCs before. Hawk is a contender as well, and he will race a YZ450F four-stroke for the first time this season after spending years on two-stroke equipment.

Hawk’s young teammate Thad DuVall will race XC1 for the second time in his career. After clinching the XC2 Lites Championship for 250F class, DuVall made his XC1 debut on a 450 at the previous GNCC race and ran in second place before running into clutch troubles.

The ATV division packs a championship showdown in the 10 a.m. Saturday morning race as well, with women’s racers Traci Cecco and Angel Atwell tied in points coming into the last round.

The Ironman will host the final round of the first-ever GNCC UTV Series as well, with Yamaha Rhinos and Polaris RZRs competing.

The Klotz Ironman GNCC finale packs a variety of special events, including free ATV demo rides from Can-Am, Yamaha and KTM, and free demo rides of KTM bikes. Yamaha plans a GNCC Championship party for Ballance. A pair of monster trucks will put on a demo run on the track also.

Spectator passes are $15 for the full weekend, with pro pit access and pro autographs included at no additional charge. On both Saturday and Sunday, youth riders race at 8 a.m., amateur riders race at 10 a.m., and the pro and pro am classes compete at 1 p.m. For more information on the racing series, check out the official series web site at www.GNCCRacing.com.