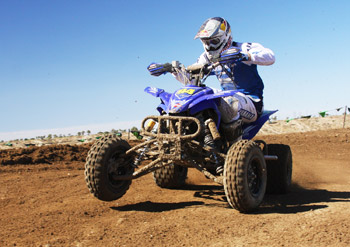 Yamaha factory rider Dustin Nelson put in a dominating performance at Round 8 of the 2008 ITP/Yamaha QuadCross Championship Series, running away with both motos at Competitive Edge MX in Hesperia, California.

His overall win here was enough to clinch the overall series title with one round remaining.

Nelson, the 2006 series champion, led the season point standings from the first event in March, winning at the series opener and following that up with three more victories and two additional top-three finishes.

Throughout this impressive streak, the 29-year-old from Ramona, California, used ITP QuadCross MX PRO tires mounted on ITP T-9 Pro Series wheels on all four corners of his YFZ450 — a great choice considering the wide variety of track surfaces encountered during the series, from loose loam to hardpacked clay.

The final event of the series takes place at Glen Helen Raceway on November 30th. For more information, visit www.itpquadcross.com.