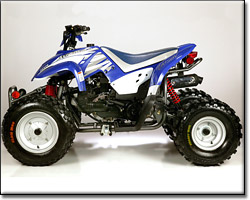 Crank Motorsports, in affiliation with Unison Motors, has announced it will be giving away a Desert Cat 150cc ATV on December 9th, 2005 at General Motors Place in Vancouver, BC during a Vancouver Canucks hockey game against the Ottawa Senators.

This game marks the 100th consecutive sellout for the Canucks and the Crank and Unison team extend a heart felt congratulations to everyone in the Canucks organization and are very proud to be involved in this important and memorable event.