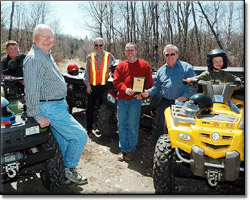 The following is an actual report from a volunteer of the Haliburton ATV Association:

Yesterday Hugh, Steve and I went out riding for the day at Anson Mountain/Sheldon Lake. I had just unloaded my bike when I got a call at 4pm from a guy lost in the bush with his 6-year-old son. No matches, food or water. He got my number off the Haliburton ATV map. His cell phone would work for a few seconds and then cut out.

It took about five phone calls back and forth to figure out roughly where he might be. At one point I asked him if he was OFATV and he said sheepishly that he wasn’t. I think at first he thought we wouldn’t come for him because he wasn’t a member …kind of a CAA thing in his mind.

He had sunk his ATV and both he and his son were wet and cold and had been walking an hour and didn’t know where they were. I had the OPP on the other line as well by the third or forth call.

So from some of the bridges he described (some of what he said didn’t make sense and some did), I had a hunch where he was but he kept talking about a steel bridge (but there is no steel bridge on that trail). I called Hugh and he said he would come with Steve so we all gassed up and headed to Donald where we rendezvoused with the OPP and finalized the plan.

OPP borrowed an ATV from the Haliburton Fire Department and were going to come to the Gooderham south end. Dan Collings was with the OPP group even though he was just off shift because I knew he was familiar with the trail as we have ridden it together and dispatch had passed that info on to the duty officers.

We went down the Gooderham trail from Donald. The Gooderham trail, as many who have ridden it will attest, is quite gnarly and pretty much an all day return ride. I wasn’t positive that the lost fellow hadn’t wandered up Wolf Lake trail somewhere but thought he was probably south of the Telephone Bay Rd. trail.

It was pitch black by dinner hour and I told them to stay put but they were cold so they walked back towards the direction they had come from. Along the way we encountered a large pine that had fallen across the trail since the boy and father had passed through.

It had been very windy all day. We couldn’t get around it so Hugh winched it aside. Further down the trail there was a 40-foot wide washout where a beaver dam had let go and what was left were huge boulders some as big as cars. At first we thought they couldn’t have come through there but with flashlight inspection we could see how they got through.

We found them about 3/4 way down the Gooderham trail cold and glad to see us but soaking wet and covered with mud. The little boy had his dad’s coat on and was shivering but still full of questions.

We finally got a cell connection and aborted the OPP approach from the south. It is doubtful they could have got up from the south anyway as the area was flooded. I winched the bike, which was buried, out of the mud (it was a large flooded area that may have come from another tributary of the washout we saw earlier on the trail) and we got them warmed up a bit and we brought them out to Telephone Bay Rd. where three OPP cars were waiting.

We left him with the OPP and headed north the same way we came down to get back to the trailers.

Happy ending for all but it would have been rough if they were wet like that overnight as the temperature was not far above freezing that night. The guy we rescued said he would be joining the HATVA … for life