Doug Eichner On A Roll 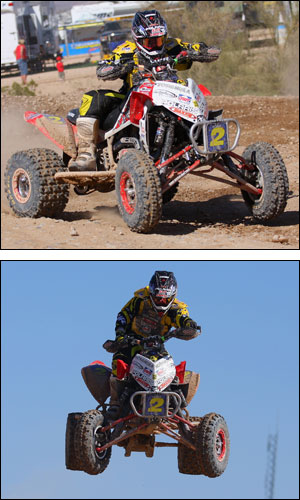 Racing legend Doug Eichner is on a winning streak. He had a great weekend at the Lake Havasu, AZ round of the World Off-Road Championship Series (WORCS) winning both the Pro ATV and Pro Production classes.

He is currently the points leader in the ITP QuadCross Series with a pair of wins at the first two rounds. Eichner and his Yoshimura-tuned Polaris are eating up the competition.

In the WORCS series, seven-time Ponte De Vaux winner and Polaris Factory racer rode his potent Polaris Outlaw 525 S for the win in the Pro Production class in the first round in Phoenix as well as securing both the Pro Production and the Pro ATV First Place podiums at Havasu on March 21st.

The double win at Havasu was sweet for both Eichner and Yoshimura. “I won the Pro Production class on my Yoshimura Maxxis Polaris 525.” Eichner said. “I was second off the start and figured I needed to make a quick pass, within a few corners I saw my opportunity and took it, from there I ran a solid race and took the overall win.”

Doug dominating the weekend’s racing by claiming the win in the Pro ATV race the next day. “Once again, my Yoshimura Maxxis sponsored Polaris ATV got me the holeshot, from there I just put my head down and ran my own race trying to put in consistent lap times. Typically Lake Havasu is a physically demanding event due to the heat, but this year the heat was not a factor for me at all.”

Last weekend, Eichner went to Phoenix to hold his points lead in the ITP QuadCross Series — a totally different breed of ATV racing.

“I finished 1-1 in the Open Pro class at the Buckey MX Track in Phoenix. The 2 moto formats are cool. In the first moto I was about 2nd off the start and made the pass for the lead going into the 3rd corner. I checked out from there. The 2nd moto was easier since I got the holeshot and ran away with the win. It was a good weekend for me.”

Doug uses Yoshimura pipes and engine building services and feels they help give him an edge. “I can’t say enough about the power Yoshimura products give me on race day – there is plenty of performance from start to finish.”

This weekend all eyes are on Doug to see if he can keep this streak up by winning the WORCS in Auburn, WA. Good Luck Doug!

Dirt Trax Onlinehttps://www.atvmag.com
Check back frequently for new content and follow us on social media!
Previous articleKTM’s Adam McGill Makes it 3 in a Row
Next articleWhich Pure Sport?