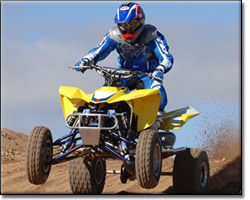 After the first few rounds of the GNC series, Team Suzuki/Yoshimura rider Doug Gust has headed to Florida to train for the next round of the series in Gainesville.

The multi-time champion from Wisconsin is getting acclimated to the heat and humidity of the south before the March 12 Pro Open event at Gatorback Cycle Park.

Gust is coming off of a 5th place finish at the Texas round. This last event could have been a “Texas Massacre” for Gust. After winning the first moto in a convincing fashion, he tangled with another rider in moto two. He was over a minute behind the pack before he got going again. He managed to work his way up from last place to 10th and card 5th overall on the day. Just ask Gust how he keeps focused when bad luck happens in a race and he’ll tell you: “I just have to focus on going as hard as I can, hope for the best, and get into the top ten,” Gust explains. It also helps that Doug consistently had the fastest lap times of the day. With his speed, Doug makes his own luck.

Looking forward to Gatorback, the “Digger” has a better strategy: “I just gotta get a better start and get out in front so I don’t get in a tangle with anyone.” Gust showed in Texas that the combination of the new Suzuki QuadRacer LT-R450 coupled with his riding skills are a hard combination to beat. As any novice racer knows the start is all important. It’s much easier racing from the front then coming through the pack.

Team Manager Wayne Hinson concurs. “The strategy is all about getting a strong start…or at least a decent one. Both Doug and Jeremiah can both blitz through the pack if they get a mid-pack start, but coming from dead last after a pile-up is tough. So we need to get out there and get in front and let the riders do their jobs. Both riders are excited to be on the new LT-R’s and that’s a big advantage.”

Gust and his teammate Jeremiah Jones are riding Suzuki’s 2006 QuadRacer LT-R450. Gust had a lot to do with the design of this revolutionary quad and even went to Japan to work with engineers. “I helped work out the way the handlebars, footpegs and seats were, so the quad would be comfortable to ride. I also tested the chassis and suspension. I really like the bike and the fuel injection system is really easy and reliable. You don’t have to do anything – it’s like being automatically jetted right and ready to go all the time.”

The quad that Team Suzuki/Yoshimura is riding isn’t much different than what can be bought right off of the showroom floor. “Yoshimura made some engine mods; they’ve got their engine management system in it and Hinson’s clutch but that’s about it on the inside. The chassis sports Walsh A-arms, Fox shocks, Tag handlebars, Blingstar’s nerfs and Galfer brakes. Compared with other bikes, though, this bike hardly needs anything. It comes out of the box almost race ready. I’m even riding on stock Dunlop tires.” Gust enthusiastically remarks.

Gust is entering his third season as a factory rider for Team Suzuki/Yoshimura. How does he feel about being part of a factory team? “The best thing is the attention and support I get. All these guys are working to help me be number one. It puts a lot of pressure on me to deliver… It’s one thing to disappoint yourself, but I mean I’ve got this whole team busting their butts. I’m really looking forward to this season. I’ve got a great bike in the ‘R450 and my whole crew is just doing an awesome job. I’m really lucky.” As previously stated… luck has nothing to do with it.