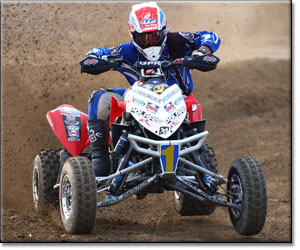 Polaris Factory Racer, and professional ATV racing legend Doug Eichner finished the 2007 WORCS racing season with complete domination at the final race of the WORCS series in Taft California. Not only did he out run the competition, but he did it three times out!

Eichner’s first victory was in the Pro Production class aboard the Polaris 525 IRS. The Outlaw sported enhanced performance from Yoshimura R&D of America Inc. and a suspension set-up by FOX Racing Shox.

Riding the Outlaw 525 S for the Pro Main win, Eichner ran uncontested lap times for more than 90 minutes in his usual hard-charging style. He did not disappoint and nothing was going to stop this man who was on a mission crossing the checkered flag unchallenged by the large field of worthy opponents.

Eichner finished the WORCS racing season in second place, only six points behind the first place finisher. After starting the first three races of the season on another manufacturer’s quad, he switched to the Outlaw and finished on the podium in six of the seven remaining races.

Eichner also showed his winning ways don’t just come aboard a quad when he smoked the Rhino-Mod. SxS class in a stock RANGER RZR. Approximately six other machines were ready for some racing. Eichner, just out for some fun, gave his fans a holeshot start to the thrill of a delighted crowd.

When he received a bump from fellow racer and good friend aboard a highly modified competitive unit, the race was on. Eichner was on the gas with his co-pilot and pit mechanic Todd Hunt hanging on for a thrilling ride. Eichner never gave up even when the modified side by side cleared a huge table top jump. Eichner ran him down again through the turns and rough course pushing the limits of his competitor and its very capable pilot.

Pressure from Eichner and the incredible stock RANGER RZR played its toll on the other side by side as the Pilot overshot the table top jump which finished his day. Eichner crossed the checkered flag and put on the best show of the year on in the SxS class of the WORCS season.

“It was a fabulous weekend and a great way to end the year,” said Eichner. “We had some major changes this season and I am grateful for the support of my honest and loyal sponsors as well as true friends. I couldn’t have done it without them. The Polaris Outlaws have proved they are very capable machines. The Outlaws performance record is something to make special note of and I can’t wait to for another chance to capture victories for the team of Polaris professionals who take great pride in their expertise and of course the invaluable support of the best sponsors in the business.”

Eichner is sponsored by and proudly endorses: