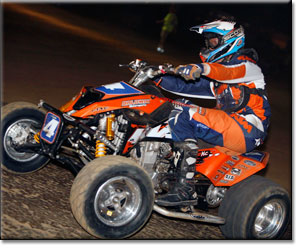 KTM’s Tim Farr had already secured a Championship in the ATVA Extreme Dirt Track Series, but traveled to Brownstown, Illinois this past weekend for the final EDT race of the year.

The Fayette County Fairground track was designed specifically for the event. The track was very short and low speed compared to all the others on the EDT circuit. In addition, it had an option lane to encourage passing.

The thirteen-time Pro Champion struggled with a series of bad luck throughout Saturday night, but he used his experience to make the most of some difficult circumstances.

Farr started off the night with a fourth place pick on the line for his heat race. The promoter decided to water the track as the riders were on the line for the heat race and Farr was forced to start from a very wet position on the track. Needless to say, Farr spun off the line.

Farr rounded the first corner in the sixth place position. Farr used the split lanes to pick off riders one by one. With three laps remaining in the heat, Farr had worked his way into second place and then quickly passed Brandon Hill for the lead.

Farr then stretched out his lead to take an exciting heat race win. Zack Stanley of Mocksville, North Carolina took the win in the second heat race of the evening.

Later in the evening, the riders took to the track for their last EDT main event of the year. When the light turned green, all twenty riders tried to make their way to the front.

Several riders’ rubbed tires and chaos ensued sending quads cart wheeling through the air. Farr and another rider got locked together in an attempt to avoid the mayhem. Luckily, none of the riders were hurt and a complete restart was issued.

All of the riders involved in the accident were sent to the third row. Much to his dismay, the referee included Farr in that group. On the restart, Farr rode safely around the first corner in last place position and then went to work.

Much to the delight of the fans, Farr once again knocked off rider after rider and began his charge to the front. The small track made passing difficult, but Farr made it look easy.

Farr moved all the way up to third position and was on the rear bumpers of (Ryan) Partee and Hill at the checkers. It was an impressive comeback to say the least.

Farr dominated the series on his new KTM Sport ATV. Farr was presented his Championship plate following the race. Farr and KTM have already earned two Championships together this year.